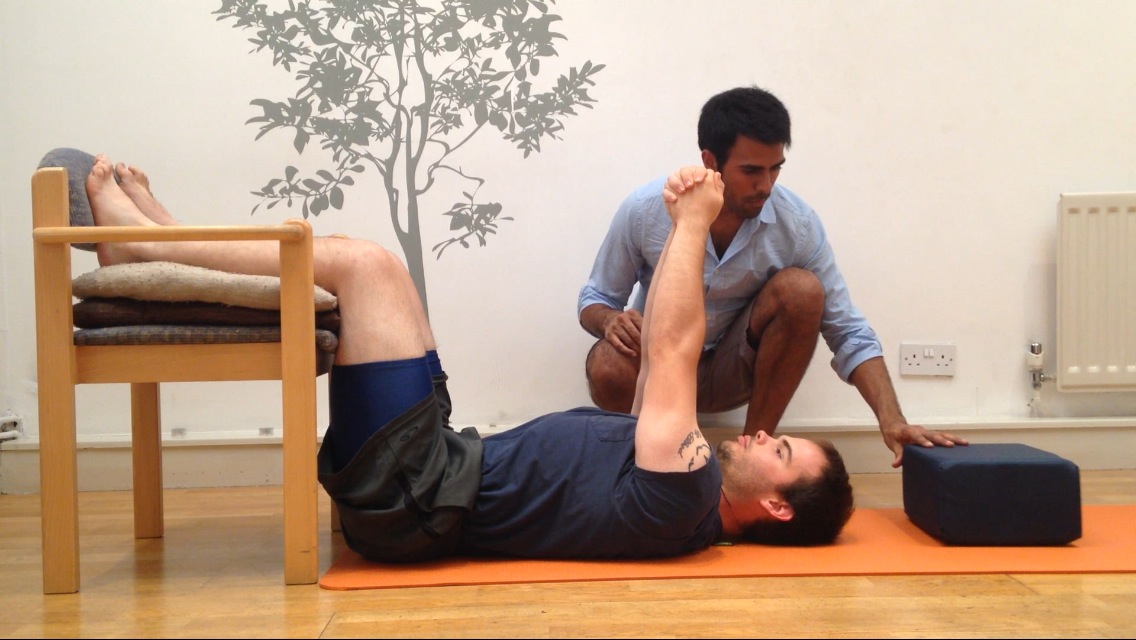 The Egoscue Method is a revolutionary form of posture therapy, created in 1971 by Posture Specialist Pete Egoscue. It uses gentle posture correction exercises to improve your body alignment and help you:

End your pain and symptoms

Feel better about your appearance

Reduce your risk of future injuries

I’ve found that most people want to improve their posture because they’re either in pain, they’re unhappy with how they look, or they want to keep their bodies working well as they age – or sometimes all three! 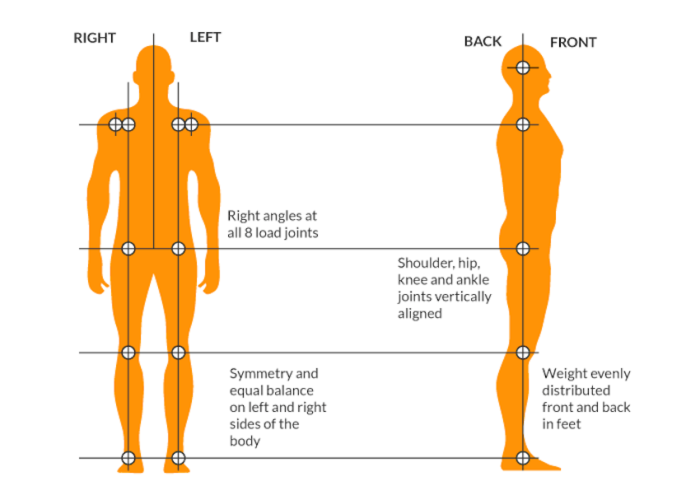 As a Posture Specialist, the biggest mistake I think people make when trying to improve their posture is believing that they have to learn how to sit, stand and walk correctly. They think it’s all about consciously trying to force their body into a better position. They’re often surprised when I tell them that this is absolutely not what having good posture is about. How many times have you tried to sit or stand up straight and then a few moments later you get distracted and end up back in your normal position? Furthermore, for many people trying to sit or stand up straighter can feel quite uncomfortable and painful because their bodies are not ready to hold them in this position.

A much better approach is to improve the balance of your muscles from left to right, and from front to back, because it’s the balance of these muscles that determines your body alignment. I give my clients gentle posture correction exercises to do daily. These exercises stretch and strengthen certain parts of their body and get them into better alignment without them even having to think about it. It’s not a quick fix and it does take time and effort, but it could help you to end your current pain (if you have any), feel more confident about the way you look, and reduce your risk of future pain and injuries. I offer consultations in a posture clinic in London and Tunbridge Wells, as well as online with Zoom, Facetime or Skype.

How Do I Start?

My Story with Chronic Pain

While studying at university I developed severe RSI and chronic back pain. I remember being so frustrated at the time because nobody could tell me the root cause. 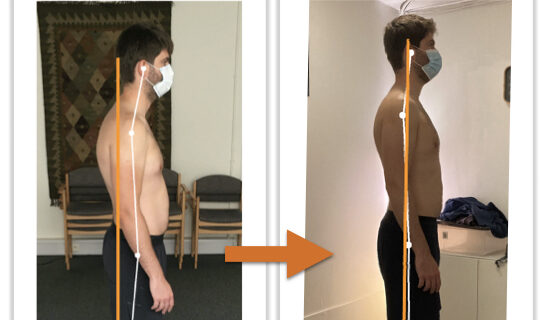 When this client came to see me he’d been suffering with pains in a broad area of his back for many years. The pain was at a constant low level but could get worse at times. Over the years he’d tried many different therapies, including physiotherapy and strengthening exercises, but had only found temporary relief.… 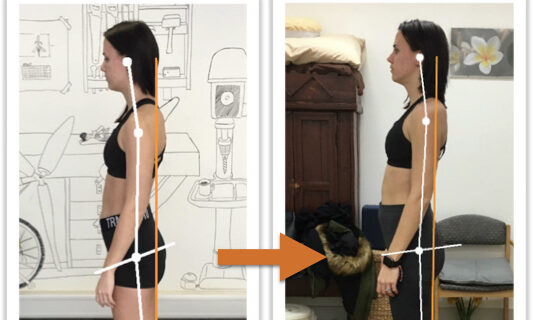 When this client came into the clinic she’d been suffering with pain on one side of her upper back for over ten years. She said the pain was always there, sometimes worse, sometimes better, but every couple of months it got so bad that it would progress to her neck, arm, and shoulder. Her hand would tremble and… 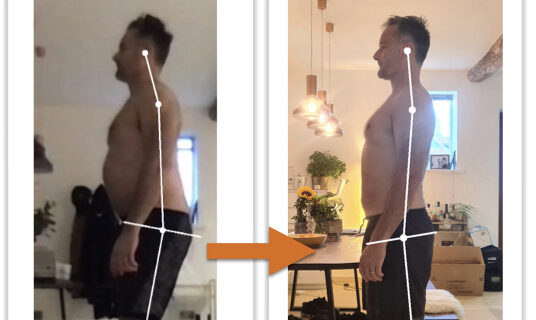 When this client came to see me his body was in a classic protective posture and spasm, potentially due to a disc bulge or herniation in his lower back. His movement was severely reduced, he was bedridden at times and in pain.  Can you see how his knees were bent, his pelvis was tucked under,…

When this client came to see me he’d been suffering with pains in a broad area of his back for many years. The pain was at a constant low level but could get worse at times. Over the years he’d tried many of different therapies, including physiotherapy and strengthening exercises, but had only found temporary relief.

If you look at his upper back from the side view you can see that it’s rounded forward excessively or ‘hunched’. This is causing his shoulders and head to round forward too and must surely be causing negative compensations within the structures of his back.

If I just focused on improving this area then I would be doing him a disservice. As a posture specialist I’ve been trained that ‘the site of your pain, is rarely the source of your pain‘ and that you must look at the whole body. What else in the photo jumps out at you?  Can you see that his hip and pelvis are way forward of his ankle? This is a sign of imbalance and weakness in some of the muscles in that area.  I thought this could be contributing to his back problems because the pelvis is the foundation of the spine – if it’s not doing it’s job properly then the back will have to compensate. His past treatments with other therapists may not have worked because perhaps they were only focusing on the ‘problem’ area and not the whole body.

I took photos of his posture and showed them to him, and said that if he could improve those two areas (hips and upper back) there was a good chance his pain would improve. I added that I didn’t want him to consciously try to stand, sit or walk with a better posture, because that doesn’t really work.  Instead, I would show him some specific posture correction exercises which would stretch, strengthen and ‘wake up’ certain parts of his body. These should improve the balance of his muscles and thus his posture, and hopefully the pain!

We did 5 posture correction exercises during the session and I checked he could do them all with no discomfort. Afterwards he already looked a little taller which was a good sign. Away he went with his homework which was to do them everyday and to come back within a week.

A week later he duly returned and said there might be a little bit of a difference but that it was too early to tell. I examined his posture and there had indeed been a teeny bit of improvement. After checking that he was doing the exercises correctly I then added a few new ones in to challenge his body further.

As the weeks and months went on his posture improved and so did the pain, until several months in it had completely gone! We saw each other 10 times in total over 10 months, with the first few sessions weekly, and with later sessions spread out with more time in between them. Most of the sessions took place within the posture clinic in London but several were online due to the pandemic.

You can see the progress he made in the picture above. Importantly, this progress is not from him trying to stand with better posture, but rather him just being relaxed, and his muscles doing a better job of holding his alignment in balance because of all the posture correction exercises he did.

I am so impressed and proud of his transformation. To change his posture so dramatically and to eliminate the pain he’d had for many years, all within 10 months, is pretty amazing. I was also impressed with his dedication and commitment to the process having done the exercises so religiously. I think his example shows that even if you’ve had pain for many years, and even if you’ve tried many things to address it, don’t give up because eventually you’ll find something that works.

How Do I Start?